Since 2001 Latterie Vicentine has been a member of Agriform and produces Grana Padano PDO in its Bassano del Grappa (VI) plant.

Angelo has been a cheesemaker since 1984. After dairy school, he joined Latterie Vicentine, which he still considers his “second home.” His is a profession that requires continuous learning, despite all the technological innovations of the modern era. Knowledge of and attention to raw materials is crucial:

“Milk is a living ingredient. Every day of the year it has a different personality. That’s why it needs to be handled with great respect, attention, and love. And that’s why even today, just like in the past, making real Grana Padano PDO is a job for an artisan.” 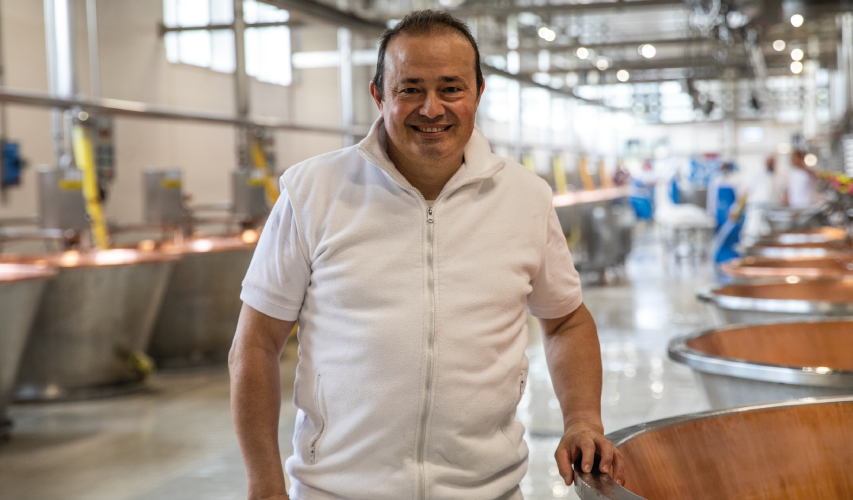 THE PROVINCE OF VICENZA

Vicenza is famous the world over as the city of Andrea Palladio. It was there that the great Paduan architect built many of his masterpieces in the late Renaissance. But that’s not all: Vicenza boasts numerous cultural and historical points of interest, including the Renaissance urban layout, the Gothic palaces, the many fine examples of Baroque art and architecture, and the Sanctuary of the Madonna di Monte Berico. Vicenza was recognized as a UNESCO World Heritage Site in 1994.
The entire province offers stunning natural landscapes and beautiful, historic sites.
The lower Valsugana and the Brenta valley, for example, are the ideal destination for outdoor sports enthusiasts, from rafting on the Brenta river to hiking through important historic sites of the Great War; the area from Bassano del Grappa up to Valstagna offers the fascinating Oliero caves, a picturesque system of karst springs partly visible by boat and surrounded by a small nature park. 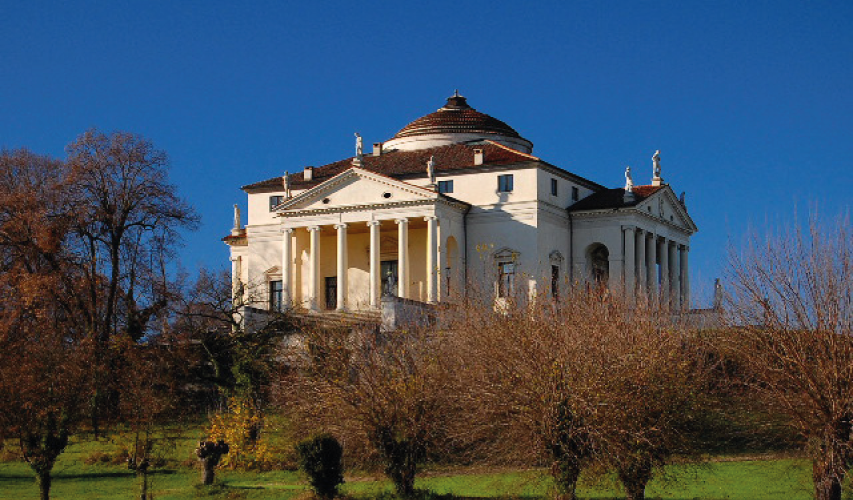 The untouched beauty of nature is the soul of the region, immersed in forests and meadows. The nearby Monte Grappa was the site of several crucial battles during the first world war.
After the Italian defeat at Caporetto, Monte Grappa became a stronghold from which a counter-offensive was launched. Today, an ossuary at its summit still holds the remains of 12,615 fallen soldiers – a place for solemn reflection.
Marostica is another must-see destination in the province of Vicenza. Surrounded by mighty medieval walls, this town is world-renowned for its chess game featuring living characters in Renaissance costume. This event has been held every two years since 1923: during the second weekend in September the central Piazza Castello hosts a re-enactment of a 15th-century chess game that resolved a dispute and averted a potential war.


BASSANO DEL GRAPPA: PEARL OF THE MIDDLE AGES, MEMORIAL TO THE GREAT WAR

Surrounded by hills and crossed by the river Brenta, Bassano del Grappa is a charming medieval town, a treasure trove of artistic masterworks by the likes of Palladio, Canova, Jacopo Da Ponte, Marinali and Dall’Acqua.
Walking through its streets, you can admire the imposing palace of Monte di Pietà and the Dal Corno Bonato house, the Ezzelini Castle and the Cathedral of Santa Maria in Colle, started in the year 1000 and rebuilt in 1417.
It is impossible not to notice the fourteenth-century Civic Tower, which dominates the entire historic center, and the Votive Temple of the Fallen, a neo-Gothic chapel from the beginning of the twentieth century, which was used after the Great War as an ossuary for the fallen soldiers of Grappa.
But the historical centerpiece of the town is the famous Ponte Vecchio (Old Bridge.)
Built according to a design by Palladio, it was destroyed and rebuilt several times due to flooding of the river Brenta and damage that occurred during the war. 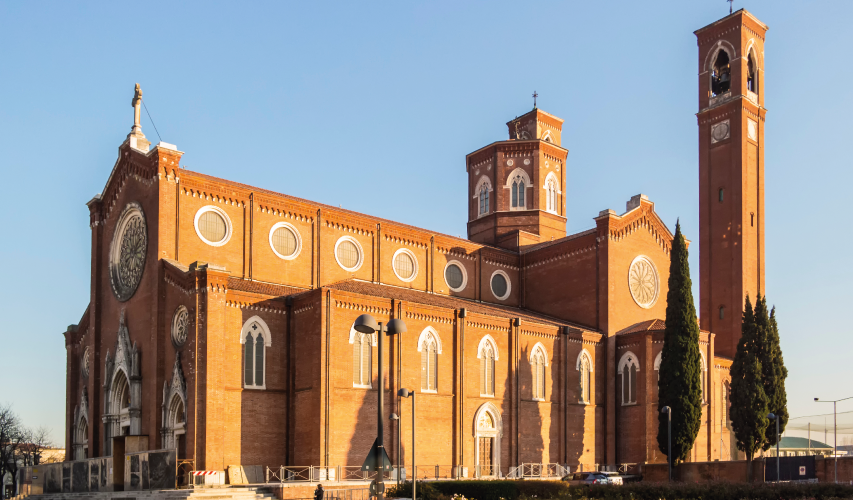 Then in February 1945, it played a key role in the defense of the city during the final months of the second world war: to protect Bassano del Grappa, the Partisans actually blew up the bridge. It was later rebuilt on the initiative of the Alpini, to whom the museum at the entrance to the bridge was dedicated at its opening in 1948.

Around the year 1000, the Benedictine Cistercian monks began a major project of reclamation and deforestation of the Po Valley, at that time characterized by large swampy areas, woods and forests. Their work made the land arable and allowed the inhabitants to devote themselves successfully to agriculture and the breeding of livestock for fieldwork and milk production.
With growing milk production came the need to preserve the excess product. The monks, already skilled cheesemakers, were able to use heat to produce a more consistent and longer-lasting cheese. They called it “caseus vetus,” meaning “old cheese.” 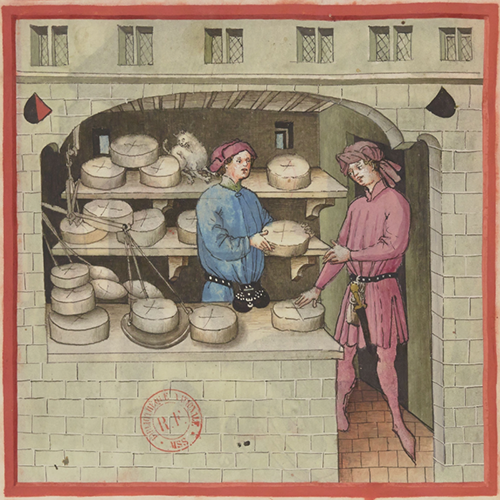 But the locals weren’t used to speaking Latin, so when they saw the compact and “grainy” texture of the cheese, they nicknamed it “grana.”
At the end of the 11th century the “caseus vetus” was already a well-established trade good with a proper commercial network. At the beginning of the 13th century it began to be used as a “currency” of exchange and payment, so much so that it was described as the “most famous cheese in Italy” by Confienza in 1477.
However, it was only in 1951 that Grana Padano was officially christened, when European dairy technicians and operators signed a “Convention” establishing precise rules on the denomination of cheeses. For the first time they recognized the category of “Grana Lodigiano” cheese, which was later divided into “Grana Padano” and “Parmigiano-Reggiano.” 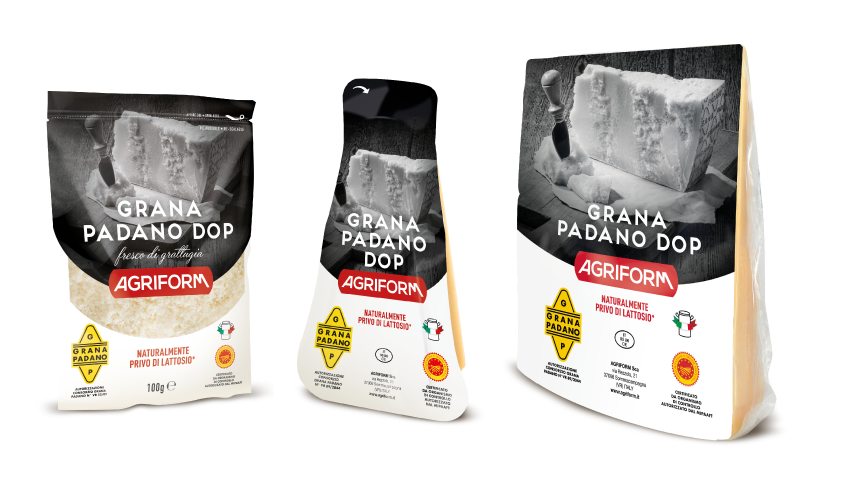 The processing of the milk, which must take place in the same area as the milking itself, strictly follows the tradition and parameters dictated by the Consortium. Here’s how.
The raw milk, sourced from rigorously controlled farms and the result of no more than two milkings a day, is partially, naturally skimmed and placed inside copper boilers. Then the whey produced by the previous day’s cheese-making process, in which the lactic bacteria necessary to start transforming the milk into cheese have developed, is added.

The inoculated milk is brought to a temperature of 31-33°C and enriched with calf rennet in order to create the curd.
The latter, broken with a tool called the “spino,” is brought to a constant temperature of 53°-56° until the end of the cooking process, leaving the granules to rest on the bottom of the boiler for 30-70 minutes to aggregate into a solid shape.
Then, using a large wooden spatula and a “schiavino,” the cheese is recovered from the bottom of the boiler and cut into two equal parts, each of which is wrapped in a linen cloth and enclosed in a tight mold, and placed under the light pressure of a disc.
Approximately 12 hours after the cheese is placed in the mold, another band is inserted between the mold and the heel so that the brand can be imprinted. After 24 hours the plastic mold is replaced with a steel one, perforated and slightly rounded, giving the cheese its characteristic shape with a convex rind and flat upper and lower surfaces.
Next comes salting, the final step before ageing.
After two days of rest the cheeses are immersed in a salt-water solution for 14 to 30 days.

Latterie Vicentine produces 76,000 wheels of Grana Padano DOP.
Founded in 2001, this dynamic and growing company is a cooperative member of Agriform. With 3 plants, 300 associated farms and 115 employees, it processes 3400 quintals of milk every day. It is a company with a storied past and a successful present.

FIND OUT MORE ABOUT LATTERIE VICENTINE 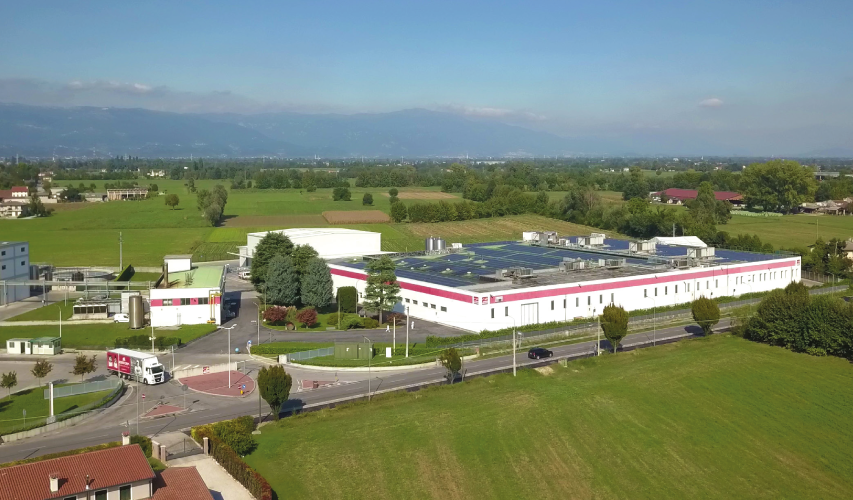 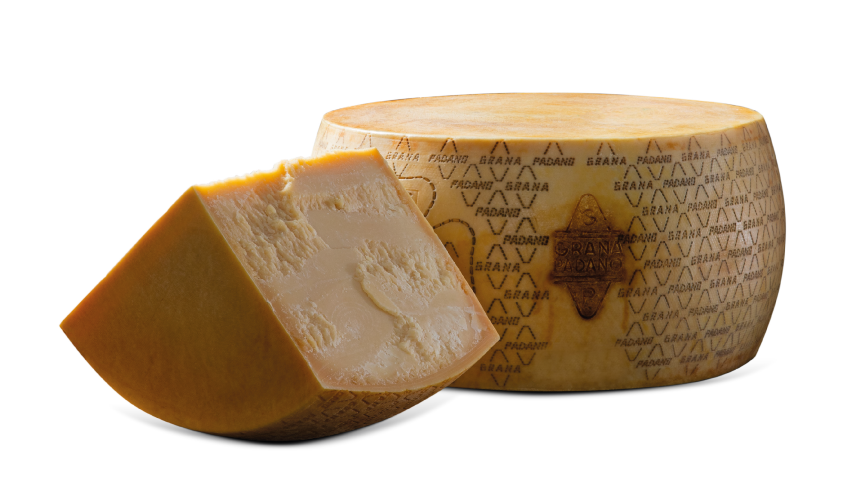 SAFELY, ALL OVER THE WORLD

In response to growing local and international market demand, in 2002 the first Agriform packaging center was created.
11 lines for production of over a thousand pieces, with cutting-edge machinery divided into two separate areas, one dedicated to portions with crust and one for grated cheese.
And that’s where the Grana Padano process ends: the cheese, after being stored in our maturing warehouse, is portioned, sometimes into cubes or flakes, or grated and vacuum-packed, in a protective atmosphere or thermoformed, but not before undergoing careful checks that guarantee its safety and freshness for the end consumer.
Finally, thanks to the company’s dense sales network, it is distributed worldwide. 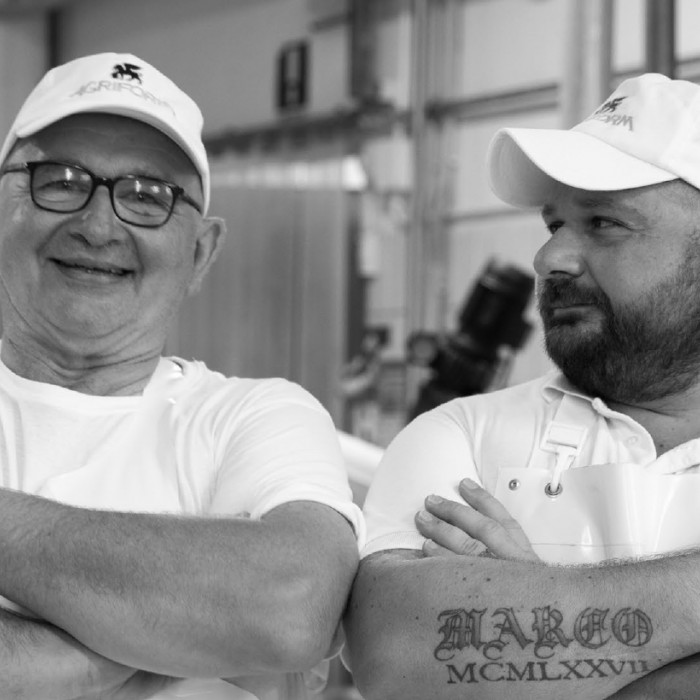 In 2016, Agriform purchased a factory in Busseto, in the province of Parma, for the production, aging, and packaging of Parmigiano Reggiano cheese. 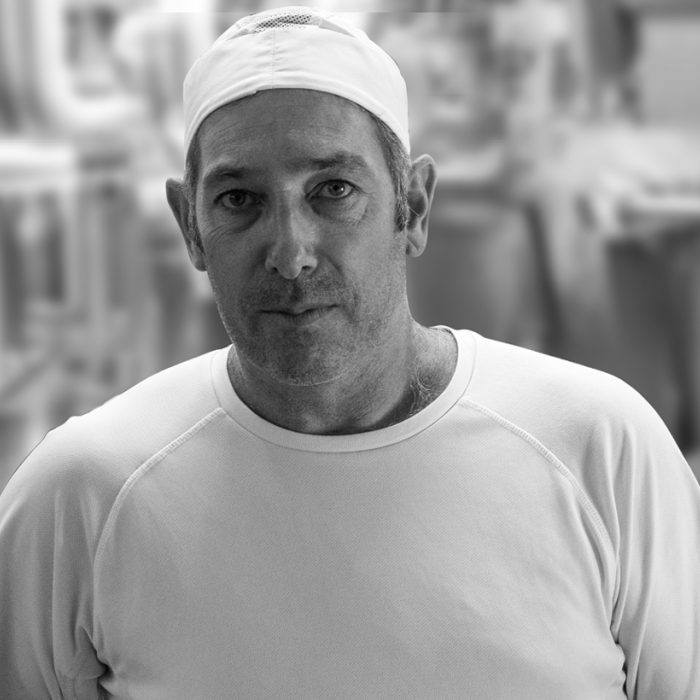 Latterie Vicentine produces PDO Asiago Fresco and Asiago Stagionato cheese in its Bressanvido plant near Vicenza and has been a member of the Agriform cooperative since 2001. 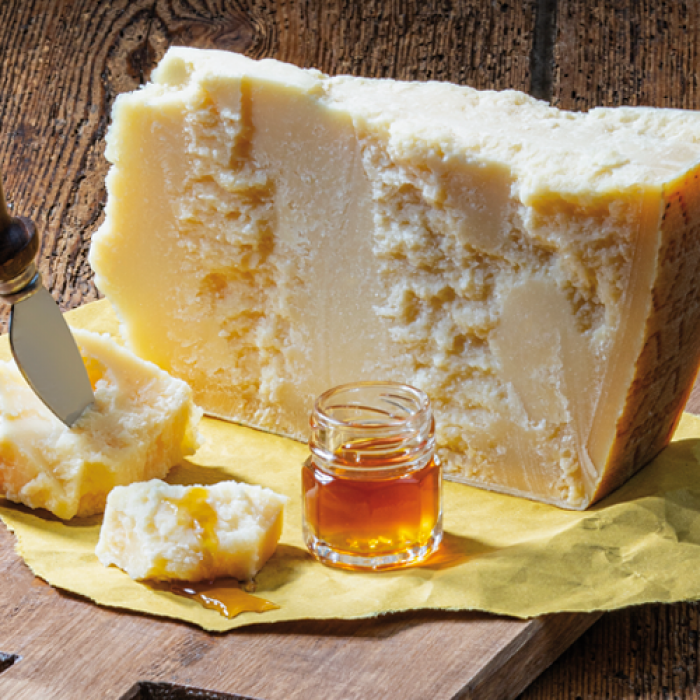